Overkill 3 is a cover based third-person shooter that brings console qualities to mobile gaming. Pumping all the juice from current devices to present a visual spectacle. Including 10 environments and over 50 unique levels to fight mobile repetition. Using audio effects and music to complement the scene and create compelling and unique gaming moments. Overkill 3 will set players on a path that will constantly provide new surprises, cinematic wow moments and present them with fresh challenges, either directly in combat or during interactive cutscenes. We want players absorbed in action-packed and constantly evolving experience.

Overkill 3 completely restarts the Overkill series. Overkill 1 and 2 have been incredibly popular (with over 20 million downloads) and both games enjoy great reviews from players. The original Overkill was a revolutionary iOS game that reached #1 Top Free Overall in the US. Overkill 2 followed in the success, yet it was more and more obvious that a gallery-shooter - no matter how elaborate and graphically polished - is no longer going to cut it. But we didn't want to let go of the simple controls that have won us so many satisfied gamers. The move to cover based shooter was a natural next step.

Overkill 3 is our biggest and most daring game so far. It is also our first game in Unity. We stay true to our gun legacy and elaborate gun upgrading, but much more focus is now on gameplay. We wanted to address the repetitiveness of mobile games. And yes, Overkill 2 was not spared the criticism. In Overkill 3 players will not be forced to play one level 10 times with little to no changes. The development is led by a PC gaming veteran who worked on the ARMA Series and Operation Flashpoint. The great variability is achieved by having different environments, huge number of unique levels, boss fights, epic moments and different game modes. Surprises and new game elements pop up throughout the whole game.

Why We Think Overkill 3 Is a Big Deal

We are a small company of 20 people. Probably past what's considered indie by now, but still independent and very close to those roots. And here we are, finishing a game that can compete with the works of giants like Glu Mobile or Gameloft. 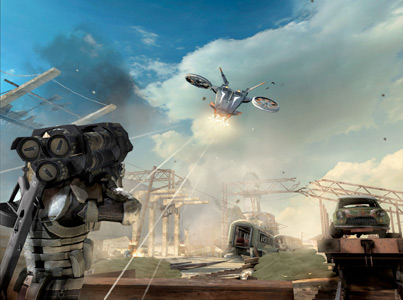 There are far more images available for Overkill 3, but these are the ones we felt would be most useful to you. If you have specific requests, please do contact us!

Three friends started Craneballs in 2008. We’ve set out to make games with balls. What we lacked in experience we made up with passion. A couple of years and games later, team Craneballs now has about 20 talented members. We are still obsessed with quality that shows in every detail and aspect of the game. When we release a new game, we make damn sure we’ve given it all the attention and love it deserves. http://www.craneballs.com.

presskit() by Rami Ismail (Vlambeer) - also thanks to these fine folks